"As Li’l Bit, Eliza Stoughton negotiates the age shifts in the character, narrating backward and in broken chronology from the 1980s to her early teen years. She’s not an unreliable narrator. Rather, she is putting the pieces together along with us as her story unfolds, which makes riding shotgun through the backroads of her memory a distinctly discomfiting experience... Stoughton’s layered performance shows us that being the prey takes many forms."
-Kerry Reid, Chicago Tribune

"There is a lot to ponder in the strangely complex and nuanced relationship built between Li’l Bit and Peck, especially in Stoughton and Ulrich’s onstage relationship. Stoughton is especially noteworthy, navigating a range of ages in a short amount of time, all filled with a palpable truth and heartbreak. Her performance is worth the price of admission."
​-Ben Kaye, New City Stage

'It’s to Stoughton’s credit that truly awful as her Natasha can be, some small part of oneself nevertheless feels sympathy for her – much as one can and does at times for Stanley, the character in “Streetcar” who, as noted above, she most calls to mind. '
​-Mike Fischer, Milwaukee Journal Sentinel

'Eliza Stoughton plays Natasha as a terror, a screaming narcissist whose mood can shift in seconds. She’s a fantastic villain.'
-Lindsay Christians, The Capital Times

‘Every performance here is practically note-perfect, but attention must be paid to Eliza Stoughton as Brock's mistress, Billie Dawn. Stoughton nails Billie's guileless vapidity at the outset of the show and her awakening sense that there's more to the world than being pushed around by a selfish lout. [...] Stoughton makes the part her own with a blend of vulnerability and self-awareness that's touching, funny and utterly believable.’
-Kerry Reid, Chicago Tribune

‘But the strength of Born Yesterday is the fabulous performance by Eliza Stoughton. Stoughton’s transformation into a smart, perceptive strong woman is a pleasure to witness.’
-Tom Williams, ChicagoCritic

‘If ever there was a moment to question all of your talents and abilities, it’s sitting in this audience watching Eliza Stoughton give a subtle, hilarious, and charming performance as Billie Dawn. Stoughton’s work screams, “WATCH OUT WORLD, I’M A STAR” all over the stage.’
-Taylor Wisham, Chicago Stage Standard

‘Billie Dawn...is played to perfection by the radiant Eliza Stoughton. I fell in love with her 10 minutes into the production!’
​-Alan Bresloff, Around the Town Chicago

‘Stoughton is wickedly sharp, playing her character smarter and fuller than the text could possibly suggest.’
-Jay Van Ort, NewCity Chicago
​
‘Darlow wisely focuses his production on Billie Dawn, played with childish wonder and giddy delight by Eliza Stoughton. Ms. Stoughton absolutely owns the stage, from the first moment she first enters, to her last exit. She is, in a word, magnificent.’
-Colin Douglas, Chicago Theatre Review

Illinois Shakespeare Festival TWELFTH NIGHT
' [Stoughton is] captivating [...] Barbour's directorial choice simultaneously underscores the much deeper, emotionally wrenching love [...] watching Stoughton's impassioned Viola give it voice, one grasps why Olivia falls for her without knowing that the so-called Cesario is actually a woman. And why Orsino transcends his usual self-involvement to do the same, despite thinking she's actually a man. Stoughton renders such gendered distinctions irrelevant; her Viola consistently makes us believe that all confining barriers are meant to be broken. That's how true love works.'
- Mike Fischer, Milwaukee Journal Sentinel

Raven Theatre A LOSS OF ROSES

'Stoughton really shines as Lila—in her exuberance, heartache and lack of self-esteem. She shows us a completely different style from her delightful performance as the frolicsome Jane in Remy Bumppo’s recent Fallen Angels.'
-Nancy Bishop, Third Coast Review


​'Lila, especially as portrayed by the excellent Ms. Stoughton, could be a cousin to any of Tennessee Williams’ tortured heroines. She’s simply magnificent.'
-Colin Douglas, Chicago Theatre Review

'An earnest Stoughton becomes Boucher’s confidante. And a flirtatious Stoughton becomes Hubbard’s crush. Stoughton is outstanding playing an actress uncomfortable dealing with reality. She looks all put together in her fur and hat but her chipper demeanor is an act.'
-Kate Walsh, The Fourth Walsh

'Director Cody Estle's sinewy and sharp-elbowed production for Raven Theatre doesn't make the case for "A Loss of Roses" as an unsung masterpiece. It doesn't have to. As with his excellent 2014 production of Tennessee Williams' "Vieux Carre," Estle creates a vivid and sorrowful hotbox world of thwarted dreams and casual cruelty.'
​-Kerry Reid, Chicago Tribune

'Gavino and Stoughton are hilarious! [They} do physical comedy like they are tanked on liquid courage.'
-Katy Walsh, The Fourth Walsh

​ 'Gavino and Stoughton are similarly entertaining to behold as they work themselves into lathers of intrigue and desire... (Such casting, Ms. Cochran!)'
-Chris Jones, Chicago Tribune

​ 'Eliza Stoughton, Emjoy Gavino and Annabel Armour discharge their athletic duties with a composure and grace belying the stamina required to execute full-body rolls off pianos, sprints in sling-backed high-heeled slippers and something known in theatrical jargon as a   "fruit and feather fight."'
-Mary Shen Barnidge, Windy City Times

'Jane, played by Eliza Stoughton, triumphs once again, remembered for her fine work in “Both Your Houses” and “You Never Can Tell.” As Julia’s best friend and strongest rival, Ms. Stoughton gives in to overindulgence and leaves inhibitions behind. Her physical comedy is outrageously funny.'
-Colin Douglas, Chicago Theatre Review

'Stoughton is a first-class Coward heroine and one could see her in any of the more substantial comedies by the master. Even in Jane’s most exaggerated moments Stoughton lets the role come to her, resisting any temptation to push for easy laughs. She cries, rages, and pratfalls without losing control of her character.'
-Dan Zeff, Chicagoland Theater Reviews

'I saw the original New York production of Doubt three times, once in a small Off-Broadway house and twice before it moved to Broadway. It was thrilling, but this one is better.
-Terry Teachout, The Wall Street Journal

'I've seen Doubt a number of times through the years, but this revival is revelatory. A genuine stunner.'
-Hedy Weiss, Sun Times

'The four person cast is rounded off beautifully by Eliza Stoughton as the vulnerable and eager Sister James'
-Dan Zeff, Chicagoland Theatre Reviews

Remy Bumppo Theatre BOTH YOUR HOUSES

'Eliza Stoughton as Marjorie Gray is lovely with a strength of character that sets her above that of a mere ingenue.'
-Colin Douglas, Chicago Theatre Review

Named one of the 'Best Theater Productions of 2014'
-Hedy Weiss, Sun Times

'Estle and his ensemble create increasingly rich and emotionally effective sketches about desperate people attempting to "negotiate a truce with life" in the shadow of death.' 3 1/2 Stars
-Kerry Reid, Chicago Tribune

﻿Named one of the 'Best of Fringe 2014'
-Kerry Reid and Nina Metz, Chicago Tribune﻿

'As Ophelia, Eliza Stoughton travels from a love struck but dutiful daughter to a grief stricken madwoman, delivering some of the play’s most haunting moments.
-Rob Kline, Hoopla

'Stoughton gives a very powerful performance, and her tenderness with Polonius and her bittersweet relationship with Hamlet seem to form the backbone of this production...she is simply stunning, taking command of the stage and attacking Claudius and Gertrude with thinly veiled accusations.'
-James E. Trainor III, Iowa Theatre Blog

"Eliza Stoughton is also excellent as Lady Teazle, a woman who loves her husband too little and scheming too much. Scenes featuring Budd and Stoughton together are highlights of the production... "
-Rob Kline, Hoopla

'﻿Stoughton (as Gloria) is a stunner and perfect for the effect that she has on Valentine . She has the patrician looks and perfect bearing that breaks the heart and engages the mind.'
- K.D. Hopkins, Chicago Theatre Beat﻿

'The cast is filled with fine performances. Gregg Matthew Anderson and Eliza Stoughton square off  in a searing battle of the sexes...
-Tom Williams, Chicago Critic

'Remy Bumppo Theatre Company’s effervescent, fast-moving revival of the play [features] a tremendously gifted and attractive cast that knows precisely how to bite into Shaw’s demanding language and delight in his arguments. Eliza Stoughton [is] lovely, nuanced and commanding in both her silences and outbursts.'
-Hedy Weiss, Chicago Sun-Times

'Sumptuously cast, "You Never Can Tell" is charming and sincere from the top...Soon Valentine meets and instantly falls in love with the older Clandon sister, Gloria, played with a carefully restrained vigor by Eliza Stoughton.'
-John J. Accrocco, New City Stage

"What is it that makes Chicagoland theater so special—and so different from theater in New York? If I had to sum it up in one sentence, I'd be stuck for words. If, on the other hand, I could send you to a show that embodies the differences between America's two great theater towns, I might well pick TimeLine Theatre Company's production of Aaron Sorkin's "The Farnsworth Invention," a play that didn't fully convince me when I first saw it three years ago on Broadway but which I bought hook, line and sinker when I saw it again last week in Chicago. Casting is the most important part of directing, and Mr. Bowling's ensemble cast bristles with fine local actors..."
-Terry Teachout, The Wall Street Journal 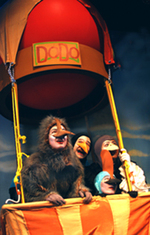 Lifeline Theatre  FLIGHT OF THE DODO

"I also enjoyed Eliza Stoughton as Candy...as she had the whole southern hospitality, innocence and energy down. She flitted about the stage as good as any southern belle..."
-Meghan Gillogly, Steadstyle Chicago